Journalists in Canada are celebrating a victory for press freedom this week. On Tuesday, the B.C. Supreme Court granted a media coalition’s application to amend an injunction that police have used to restrict journalists’ access to ongoing old growth logging protests at Fairy Creek. The court order will now permit journalists to document the RCMP’s activities as part of the newsgathering process.

On Tuesday, Canadian Association of Journalists (CAJ) President Brent Jolly likened the decision to “the sounding of an ominous warning bell to all law enforcement bodies across the country,” adding “[w]e hope the days of impeding, curtailing, or interfering with journalists are, now, in the rear view mirror.”

It’s a much needed win for press freedom. In 2016, I was named on a court injunction while covering the Innu- and Inuit-led occupation of the Muskrat Falls hydro project site in Labrador. Nalcor, the crown corporation building the dam, and a provincial supreme court justice effectively took over control of my journalism while I was in the midst of live reporting a massive story—one that happened to be documenting an Indigenous-led uprising against colonial and state power. In the months and years that followed I was forced to defend myself against charges of violating the court order and of mischief.

This week’s B.C. court decision reaffirms Canadians’ right to a free press and journalists’ right to report important stories, even where a court injunction may be in place. Had this decision existed in 2016, I would not have left the Muskrat Falls site and could instead have continued to do my job as a journalist.

In the days ahead, media will likely dispatch journalists to unceded Pacheedaht territory on Vancouver Island to cover the ongoing Fairy Creek forest defence. Many will be watching and scrutinizing the RCMP’s every move. Will they heed the court decision, or will they prioritize their own interests and continue controlling the media?

I have a prediction. The Mounties will seek out new ways to manipulate public perception of the force’s role in the ongoing colonization of Indigenous peoples and their lands. It’s what the Northwest Mounted Police was created to do. It’s what Canada’s police forces have always done. And it’s what the RCMP and other police in Canada still do today.

As part of their effort to block journalists from documenting their activities at Fairy Creek in recent months, officers held up blue tarps around land defenders whom they were arresting. Expect more of that.

We should not be under any illusion that police are impartial actors, or that they serve in the interest of all people’s safety and well-being. They enforce laws that were created to assimilate and dispossess Indigenous peoples from their lands as part of Canada’s settler colonial project.

A press freedom victory, however, isn’t a solution to the problems that confound Canada’s media. Canada’s media will still need to do what they’ve long failed at: accurately and courageously report on the violence of colonialism.

What the media misses

Events like the Fairy Creek protests are complex and require an understanding of Indigenous rights, local history, and relations between Indigenous communities and settler governments—much of it missed or skewed in news coverage.

Complicating things, First Nations are often pushed by settler governments and private interests to sign agreements to permit the extraction of resources on their lands.

Impacts and Benefit Agreements (IBA)—at times also called accommodations agreements or revenue-sharing agreements—typically include an indemnification clause stating the community or nation relinquishes its right to litigate against those who take from its lands.

In return, communities or nations are often promised jobs and a cut of the profits earned from their resources. Despite requiring Indigenous peoples to sacrifice the lands, waters or trees that for thousands of years have been integral to their collective identity and culture, IBAs are often one of the only options for communities to escape the poverty imposed on them by those now seeking so-called partnerships.

In the case of Fairy Creek, the Pacheedaht First Nation has signed  multiple agreements in recent years with the B.C. government to permit logging in its territory. For example, a 2017 revenue-sharing agreement between Pacheedaht First Nation and the province promises the Pacheedaht just under $75,000 for the fiscal year 2017-2018, and to-be-determined amounts in subsequent years. In exchange for this money, the First Nation “agrees it will not support or participate in any acts that frustrate, delay, stop or otherwise physically impede or interfere with provincially authorized forest activities.” It also “will promptly and fully cooperate with and provide its support to British Columbia in seeking to resolve any action that might be taken by a member of [the] First Nation that is inconsistent with this Agreement.”

On June 4 the neighbouring Pacheedaht, Huu-ay-aht and Ditidaht First Nations signed the Hišuk ma c̕awak Declaration, which hereditary chiefs from the three nations said in a statement is a “commitment to our people to manage the resources on our ḥahahuułi the way our ancestors did – guided by our sacred principles of ʔiisaak (utmost respect), ʔuuʔałuk (taking care of), and Hišuk ma c̕awak (everything is one).”

Days later the B.C. government agreed to the First Nations’ request for a two-year logging deferral in parts of their territories, including the Fairy Creek watershed, so that the communities can develop and implement their own resource management plans.

Despite the declaration, land defenders—most of them settlers, but with the support of some Pacheedaht citizens, including Elder Bill Jones—continue to occupy and protest on unceded Indigenous lands. They also oppose old-growth logging planned in other parts of Pacheedaht territory outside the Fairy Creek watershed. Police have made more than 400 arrests, and the protests don’t appear to be slowing down.

Pacheedaht First Nation has used forestry revenues to buy businesses and, sadly, to purchase their own title lands under fee simple ownership structures. “We are finding ourselves buying our own land back from private developers, and from either B.C. or the feds,” Pacheedaht Chief Jeff Jones recently told The Narwhal. “We feel that’s the only way right now.”

According to The Narwhal’s report, the nation used forestry revenues to purchase Pacheedaht Mountain, where leaders say they hope to relocate the entire community in order to escape the flood plain and tsunami zone where Canada created their reserve.

The contradictions rooted in the historical and ongoing colonization of Pacheedaht are evident. Are the community’s decisions today expressions of true self-determination when there are so many powerful external forces at play, compelling leadership to buy pieces of their own unceded territories as Crown-owned fee simple lands?

Or is colonial coercion still at work? Of course it is, and it should be reported as such.

It’s not the fault of First Nations leaders when they take the carrots dangled before them by the very forces that caused their communities’ poverty in the first place. Our attention and scrutiny should be on those doing the harm and dangling the carrots.

Once we focus our eyes on the colonial power brokers and their game, we can see that state violence—be it the infringement of Indigenous rights or the criminalization of land defence—is almost exclusively directed at those who challenge Crown sovereignty or threaten the extraction and accumulation of capital from Indigenous lands.

As long as First Nations act within the bounded choices defined by the colonizer—assimilate into the capitalist economy or continue to live in poverty—they will be regarded as agreeable, civilized, reconciliation-friendly counterparts in Canadian society.

But when they reoccupy their lands, threaten corporate profits, or otherwise undermine the “certainty” that investors so cherish, they become targets of state-sanctioned police violence. Criminals in their own lands.

The drive to extinguishment

On June 25, 2019 the Pacheedaht and neighbouring Ditidaht First Nation signed a land claim agreement-in-principle with the Government of B.C. and the Government of Canada. It contains the very colonial mechanism that Indigenous critics like Arthur Manuel and Judith Sayers have warned are at the core of Canada’s comprehensive land claims policy and the B.C. Treaty Process.

If ratified, the Ditidaht and Pacheedaht Agreement-in-Principle would constitute “the full and final settlement in respect of any aboriginal rights, including aboriginal title, that Ditidaht / Pacheedaht may have in Canada.”

That means that the First Nation would be extinguishing the underlying title to their lands, resulting in greater certainty for resource extraction within the bulk of their traditional territories.

The Canadian media’s fight for press freedom must be accompanied by clear-eyed scrutiny of the forces of power at play when settler colonial states, and the police that enforce their laws, commit violence against Indigenous peoples or criminalize dissent on unceded First Nations territories.

A 2019 Newfoundland and Labrador Court of Appeal decision in my case affirmed journalists’ special status under Canadian law, and that their status is a material fact courts must consider when granting injunctions. Justice Derek Green wrote in the decision that “freedom of the press to cover stories involving Indigenous land issues [is] even more vital.”

Last year the RCMP’s oversight body, the Civilian Review and Complaints Commission, criticized the force’s use of broad exclusion zones during the RCMP raid of Mi’kmaw land defenders during the 2013 anti-fracking protests in New Brunswick. These are the same exclusion zones Mounties used in unceded Wet’suwet’en territory in 2019 and 2020, and now in Pacheedaht territory, to restrict journalists’ access.

Though the B.C. Supreme Court has reaffirmed journalists’ rights once again, the RCMP is not about to change its ways. That means the media must expose them while they expose the broader colonial dynamics at play—Canada’s aim to assimilate and dispossess Indigenous peoples from their lands.

Journalists have fought hard for press freedom. We now need to use that freedom to uncloak the power that colonizes.

A note from our editorial team
The Breach's coverage reaches hundreds of thousands of readers and viewers—no paywall, no ads. That's because our sustaining members contribute an hour of their wages per month to help us create independent, bold, transformative journalism. Join us today!
Become a Sustainer
Top | RCMP officers hold up a tarp to obstruct journalists' view while they make an arrest during the Fairy Creek protests in May. Photo: Mike Graeme.
Topics 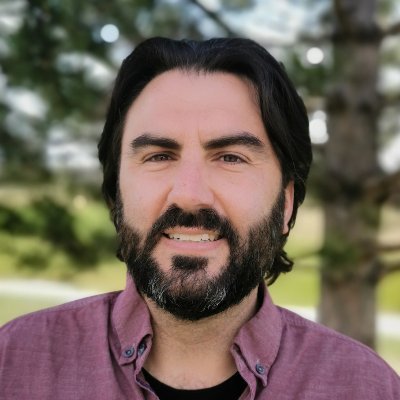 Justin Brake | Justin Brake is a journalist and contributing editor of The Breach. He has worked as a reporter and producer with APTN News, as an editor with The Independent, and has written for Maisonneuve, Briarpatch, the CBC, and others.
Follow The Breach
Related 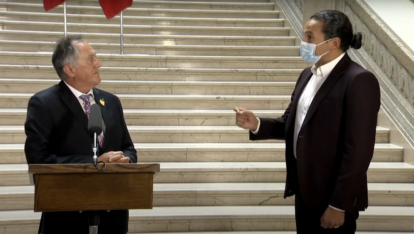 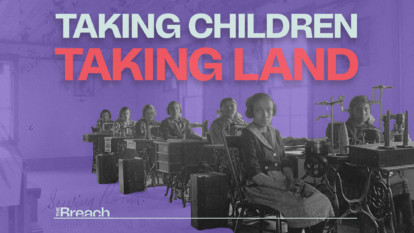 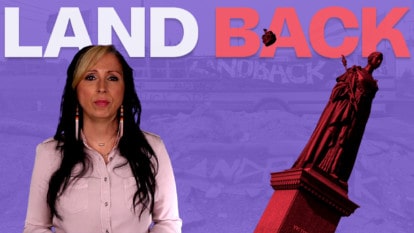